DISLIN is a very nice and well-documented 2-D and 3-D plotting framework for Fortran and some other programming languages. Furthermore DISLIN provides some widgets to create simple graphic user interfaces (GUIs).

This how-to describes how to install DISLIN 11.3 on Ubuntu 20.04 (Focal Fossa) and how to compile and link a sample Fortran 90 program with GUI against the shared and static DISLIN libraries.

This how-to should work on Ubuntu-related distributions as Linux Mint, etc.

In this how-to Gfortran is used as the standard Fortran 90 compiler of GNU/Linux. A new thing in Ubuntu 20.04 is the absent 32-bit version. So I just cover a 64-bit installation.

Focal Fossa has the Version 4 libraries of Openmotif in its universe repository which work with DISLIN 11.3. Ensure that you have Internet access and install Motif packages:

In general multiverse/universe repositories should be activated in Focal but if you get an error therfore here, activate it as described as followed. Write in one line in the terminal:

Take care of the back tics (`): You find the `-key to the left of the key “1” on the standard English keyboard. The `lsb_release -sc` makes this command independent of the Ubuntu version.

This how-to uses Fortan. The GNU Fortran compiler Gfortran is in the repositories of Ubuntu. Install it right away:

It is not required for compiling DISLIN-applications but recommended to install the meta-package “build-essential” as well. It contains commands like make, configure, etc.

If you want to use another supported language you can install it instead of Gfortran. For the differences refer Test Installations for DISLIN and Linux for details.

To get started have a look at “/usr/local/dislin/README“. To compile the sample program map_f90, copy the source file to your home directory, move to home and compile/link it with “gf95link“:

If you installed another compiler use the appropriate script, e.g. clink instead of gf95link for C.

Note: Unfortunately you cannot run your app from the file manager when you built it with gf95link (but from the terminal). Use the “The classic way” below to add this capability.

If you want to compile/link your program the classic way or to integrate DISLIN to your IDE and if you want to run it from your file manager, you call DISLIN via “-ldislin“, the necessary “dislin.mod” file is located in “/usr/local/dislin/gf/” for single precision. For double precision use “-ldislin_d” and find the mod-file in “/usr/local/gf/real64/“:

Change “doubleprec-app.f90” to the real file/app name. The compiler and linker options are explained in the next chapter.

in the terminal or double-click the file in your file manager: 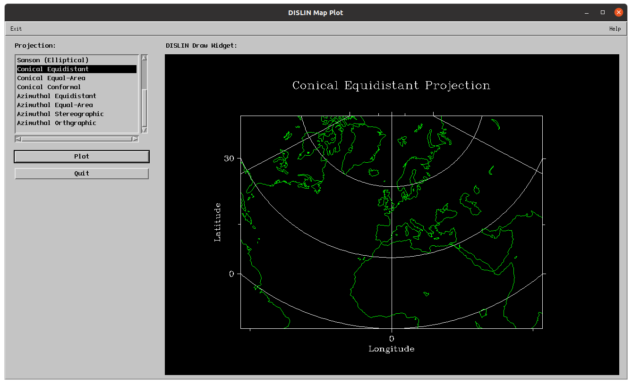 In both cases your app is dependent on a gfortran and DISLIN installation on target machines.

“gf95link” and linking via “-ldislin(_d)” links the shared DISLIN library to your program. That reduces the footprint of your application on your hard disk. However if you intend to run this program on other machines, you have to install DISLIN on these machines, too. It is also depended on a gfortran installation on these machines.

To avoid both issues go to the next chapter and build your program statically instead.

To build your DISLIN app against the static DISLIN library you have to install missing X11-libraries:

For compiling and static linking type for map_f90 (and for other single precision apps):

instead.The options are described below:

Now you can start your GUI-program from your file manager or terminal. Furthermore you can copy it to any other machines without DISLIN and Gfortran installed. But you still need the Motif4 libraries and some other libraries. Install packages libxm4 and libquadmath0 on these machines.

The -static option would normally solve that but some Motif libraries are not provided in a static form, so this option fails in this case.

But they are still some issues left which we take care of in the next chapter.

For a long time it was complicated to provide distribution-independent applications in GNU/Linux. In Ubuntu it was no different, of course.

There were several problems:

For an Only-Ubuntu-package you just have the package dependencies of libxm4 and libquadmath0, as long as you do not make use of the map capabilities of DISLIN.

But in newer Ubuntu versions you may use Snap or Flatpak or AppImages to package distribution-independent packages. This may solve all the problem regarding distribution dependencies but I have not tried it yet.

“No application installed for shared library”

Newer gfortran versions uses -fPIC as default. This causes the file manager to interpret the binary as a shared library instead of an executable and you are not able to run your app from the file manager (but from the terminal). You get the error:

To avid this use the link option -no-pie as described above.

If you get an error while linking against the shared library, like:

you have to specify the environment variable “LD_LIBRARY_PATH” to make DISLIN find its shared libraries. On current supportet Ubuntus you should not see this error.

However, for a system-wide setup start a text editor (here “nano”) with root privileges and open the file bash.bashrc. Open a terminal and type:

and append the following lines:

For a single user setup just do this in ~/.bashrc in your home directory instead of /etc/bash.bashrc.

Thanks to Helmut Michels, the author of DISLIN, for his assistance. He helped me out in this version, too. Great support. If you have any question regarding DISLIN go to dislin-users in Google Groups. He is around there.