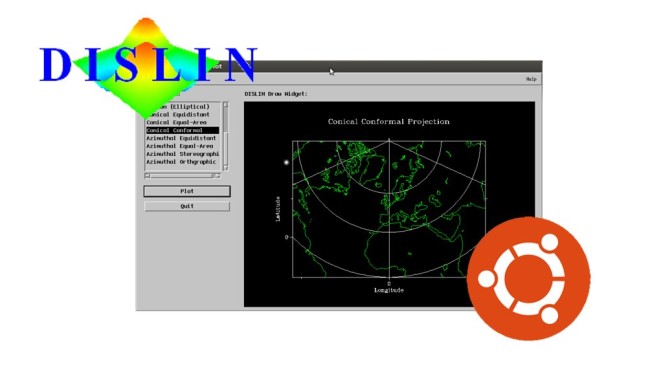 DISLIN is a very nice and well-documented 2-D and 3-D plotting framework for Fortran and some other programming languages. Furthermore DISLIN provides some widgets to create simple graphic user interfaces (GUIs). This how-to describes how to install DISLIN on an arbitrary Ubuntu system and how to compile and link a sample Fortran 90  program with the shared and static libraries.

Since Ubuntu 12.04 (Precise Pangolin) and DISLIN 10.2 came out, things are easier for Debian-based Systems now. However 64-bit users have to consider some points.

I updated this article for Ubuntu 14.04 (Trusty Tahr) and DISLIN 10.4 users. Obsolete instructions for Ubuntu 12.04 and lower as well as DISLIN 10.0 were crossed.

In this how-to Gfortran is used as the standard Fortran 90 compiler of GNU/Linux.

On 64-bit Ubuntu systems, you have to consider the following points. These are optional on 32-bit systems!

If you are on a 64-bit system you have to specify the environment variable “LD_LIBRARY_PATH”. Start a text editor (here “gedit”) with root privileges and open the file bash.bashrc. Press ALT-F2 or open a terminal and type:

on Ubuntu. If you use Kubuntu type:

instead and append the following lines:

Thanks to “mathmal” to point me to this issue!

To start a self-compiled DISLIN program with a graphical user interface (GUI)  from your file manager fails on 64-bit Ubuntu. The DISLIN Compiling script “gf95link” does not produce such binaries. You have to start the GUI-programs from the terminal. To change this behavior you need to compile/link your programs statically with the DISLIN library. To do this you have to install the following development packages first. On the terminal, type:

To get started have a look at “/usr/local/dislin/README”. To compile the sample program map_f90, copy the source file to your home directory, move to home  and compile/link it with “gf95link”:

If you want to compile/link your program the classic way or to integrate DISLIN to your IDE you call DISLIN via “-ldislin”, the necessary “dislin.mod” file is located in “/usr/local/dislin/gf” for single precision. For double precision use “-ldislin_d” and find the mod-file in “gf/real64”. 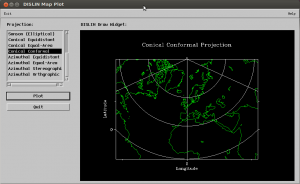 “gf95link” and linking via “-ldislin(_d)” links the shared DISLIN library to your program. That reduces the footprint of your application on your hard disk. However if you intend to run this program on other machines, you have to install DISLIN on these machines, too.

Another issue is that if you are on an 64-bit Ubuntu you can not start your DISLIN application from your file manager (Nautilus, Dolphin, etc). You need to start it from the command-line.

To avoid both issues go to the next chapter and compile/link your program statically instead.

To add the missing capability of starting 64-bit DISLIN GUI-programs from a desktop file manager and to make your programs (32- and 64-bit) independent from an installed DISLIN, compile your program as described for “map_f90” below. But first, make sure that the development packages mentioned in chapter “Capabilities to start 64-bit GUI-programs from the desktop file manager” are installed. Type for map_f90 (and for other single precision apps):

instead. Now you can start your 64-bit GUI-program from your file manager. Furthermore you can copy it to any other machines without DISLIN (and gfortran) installed. This is valid for 32-bit systems, too. But you still need the Motif4 libraries (package: libmotif4) on these machines.

Did you notice the question mark in the upper headline? In GNU/Linux it is complicated to provide distribution-independent applications. In Ubuntu it is not differently, of course.

However, you can provide a third-party-independent deb-package to Ubuntu users which depends “only” on Motif (package “libmotif4”) , if you link your app as described in the previous chapter. In comparison to Precise Pangolin -static-libgfortran works on Trusty Tahr. As far as I know Ubuntu provides Motif 4 in the universe repository since Natty Narwhal (11.04). That means your deb-package will work from Ubuntu 11.04 onwards.

For people who want to provide fully static-linked applications, the project CDE could help. But I have not tested it yet.

I want to thank the developer and maintainer of DISLIN – Helmut Michels – for his assistance. He helped me a lot, especially to get DISLIN binaries linked statically.