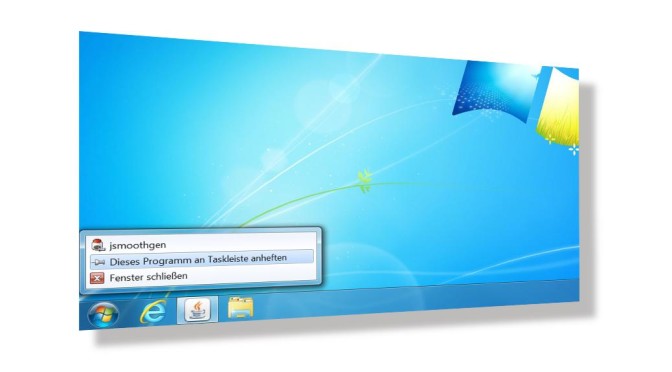 Java apps run on a lot of platforms. But this is not always a pro. Platform dependent functions are often not realizable with Java per se. One of this function is the ability to pin the application to the Windows taskbar.

This how-to describes how to make Java apps pinnable to Windows taskbar via the exe-wrappe Jsmooth.

To pin apps to the taskbar was introduced since Windows 7. However Java’s jar or class files are not able to be pinned even when they are wrapped in a exe-file.

But altering the default settings of the exe-wrapper Jsmooth make Java apps pinnable. Furthermore it is possible to associate file types to the application (as docx-files to Microsoft Word). It appears and behave as a native Windows app for the user.

In the left area click on the  “Skeleton” icon. On the right in the “Skeleton Selection” area, choose “Windowed Wrapper”.

In the area “Skeleton Properties” the entry “Launch Java app in the exe process” must be checked to get the desired property for the exe file. 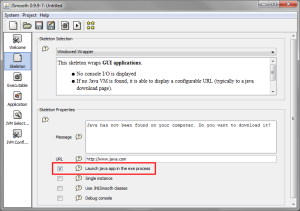 Go ahead to set up the wrapper fitting your needs. If you need help refer the manual.

Now the executable exe-file should be able to be pinned to the taskbar.

Jsmooth wraps the JAR file in an exe-file but the executable is still dependent on a Java virtual machine (JRE – Java Runtime Environment). That means, you have to have a JRE installed on your system. However Jsmooth is able to embed the JRE in the exe-file optionally to get rid of this dependency. This is not always reasonable.

Generally the produced executable is asking for downloading the JRE if it can not find it on the system.

Unfortunately the developer stopped maintaining Jsmooth since 2007. The program has some issues in converting the app icon in good quality. This is caused by the color reduction of the icon done by Jsmooth in my opinion. I have no idea why this is made.

Some users noticed false alerts of some anti virus software with the produced exe-files.

As far as I know alternatives, as Launsch4J, have no settings to run Java apps in the same process as the exe-file.

EXE-Wrapper Jsmooth is able to wrap a Jar-file in a Windows executable and make it pinnable to the Windows taskbar when you choose the correct settings. Furthermore it is possible to associate file-types to the Java application and it behaves as a native app for the users with a customized app icon, etc.

Moreover it is possible to embed a complete JRE in the executable which make the application independent from a system-wide installed Java virtual machine.