Does your Thinkpad X230 suddenly turn off without any direct reason? It is not always a broken main board.

This problem seems to be very common for this model when you google this issue. I bought a used but refurbished X230 and ran into this problem a couple month after purchasing.

It appeared sometimes rarely, sometimes a couple times a day independently whether it ran on battery or power supply. But it never turned off when it was docked in the docking station on my desk. It mostly appeared when I had it on my knees and then put it on the desk. After a couple seconds it turned off, not immediately.

It happened on Windows as on GNU/Linux. So it could not be a driver problem.

I could not reproduce this error every time. Sometimes it turned off, most of the time it worked.

Check and do first

One reason for a sudden turn-off can be an overheated processor. The BIOS turns of the machine when the temperature of the processor is far more than 95°C. I had this problem with a former Thinkpad T410. Cleaning the cooling fan and renewing the thermal grease solved this problem. Sometimes just cleaning the fan is sufficient.

A decent guidance for this task can be found at myfixguide.com.

When it only appears in battery mode check and change your battery.

If nothing of the above helped it is probably the main board or more likely the hard drive or SSD connection. Later another issue was the deal maker: the cable connections. Refer chapter “Supplement” for details.

In a German forum post the user “gestern” pointed me to the hard drive SATA connection. I looked deeper into it. The HDD, in my case a SSD, was mounted without a caddy directly in the HDD-slot. So it had some minor play. I bought a appropriate caddy and installed it but the problem was not gone. It still turned of from time to time.

To fix the SSD better in the slot, you need insulating tape, a scissors and a cross-head screwdriver: 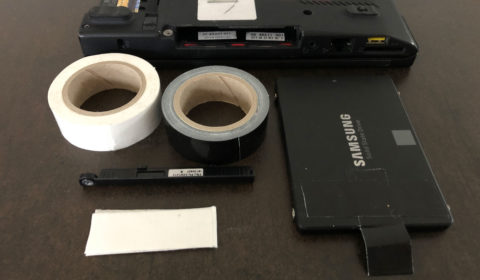 I removed the caddy, just mounted the screws on the side of the SSD to reduce horizontal play. In order to pull it out of the slot again later, I put a flap made from insulating tape on the front of the SSD. 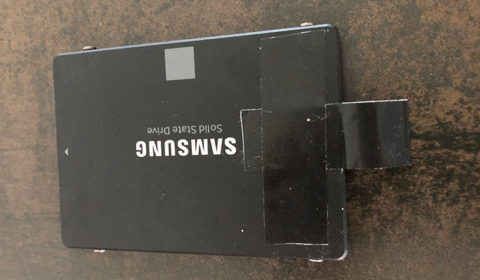 Then I installed the naked SSD. After I cut off some pieces of insulating tape with the length of the approximate HDD-slot width and put 4-6 layers on top of each other. How many depends on the thickness of your tape. I pushed this thick strip crosswise under the built-in drive and clamped it therewith into the slot. 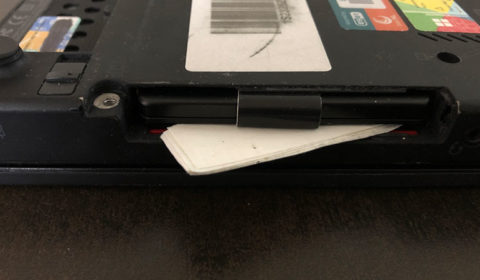 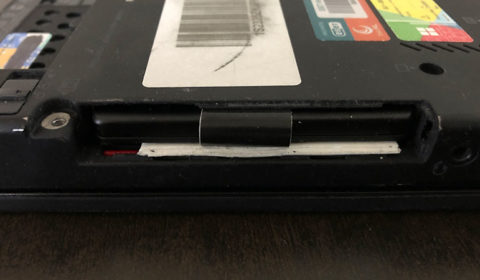 This has worked till now.

There is maybe a reason that the refurbisher did not use a caddy for the SSD installation.

The problem occur again after 2-3 weeks. I diassembled the whole notebook computer, except the display, and due to this I unplugged all internal cable conections and plugged them back in. You find illustrated help at ifixit.com. I installed the SSD as described above. Since half a year the problem is gone now.